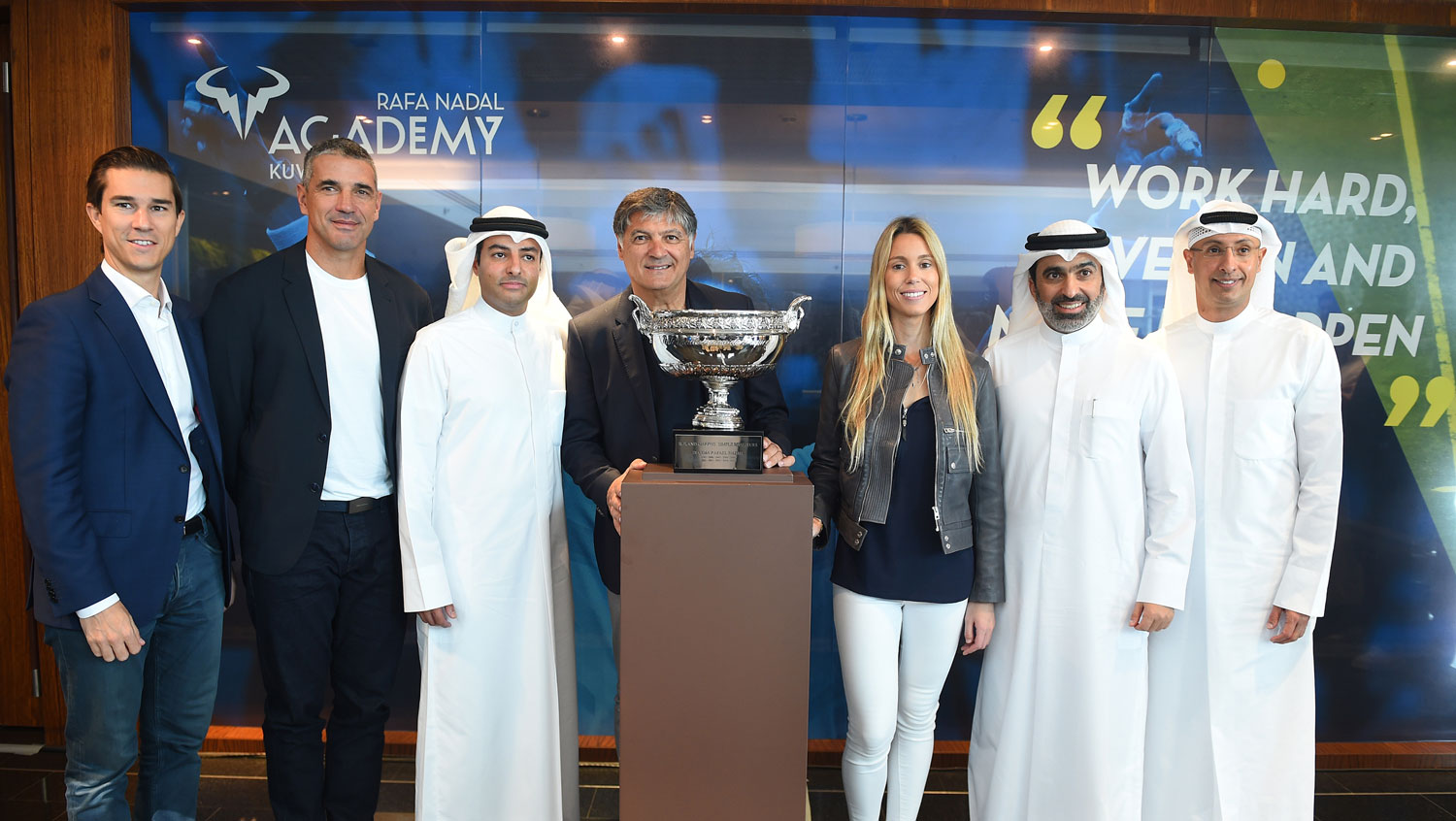 The world of tennis witnessed the emergence of a new global player today as Tamdeen Group, Kuwait’s leading mixed-use property developer that is reshaping the country’s urban and social landscape through innovative development projects, and Rafa Nadal Academy by Movistar, one of the world’s leading tennis centres, announced the landmark launch of the Rafa Nadal AcademyKuwait.

Bearing the name of the legendary tennis icon, who will end the 2019 ATP season as the world’s top ranked player, the Rafa Nadal Academy Kuwait will formally open when Rafael Nadal personally inaugurates the Academy himself in February2020.

The Rafa Nadal Academy Kuwait will serve as the training and developmental hub of the all-new Shaikh Jaber Al Abdullah Al Jaber Al SabahInternational Tennis Complex in Kuwait. One of the country’s pioneering public-private partnership projects, the world-class Complex is the biggest sports initiative in value and size under the Kuwait Public Authority for Sport.

Mohammed Jassim Khalid Al-Marzouq - Chairman of Tamdeen Group, said: “In the race for excellence, there is no finish line. Our vision is clear and Tamdeen is delivering on its promise to reshape the state’s urban and social landscapes.Our commitment to this project is four-fold: aid national development schemes outlined by our wise leadership; leverage progressive public-private partnerships to facilitate world-class infrastructure projects; construct facilities which establish Kuwait and its championships on the international sporting map; and foster a fertile environment for Kuwaiti athletes to excel in international sports.”

“We thank Toni, Rafa and the entire Academy team for their commitment to Tamdeen and Kuwait. With our shared vision and values, and the collaboration of the Kuwait TennisFederation and Kuwait’s General Authority for Sports, the Rafa Nadal AcademyKuwait at the Shaikh Jaber Al Abdullah Al Jaber Al Sabah Tennis Complex will drive awareness of tennis and healthy living among Kuwaiti youth and attract anew generation of fans to the sport and general fitness. Today, we provide the platform to turn dreams into reality. By utilizing our wealth of experience alongside some of the leading international expert s in the field, the project has been designed to keep pace with the State Of Kuwait’s significant position in the world of tennis.

“Finally, I would like to send our congratulations to Rafael on ending the year as the world number one – it’s a truly amazing achievement,” added Al-Marzuoq.

During a video message, Rafael Nadal expressed his pleasure at the new venture: “I’m personally very happy to open theAcademy in Kuwait. We’re working hard to create the right programs for the kids and our members, making for strong development of tennis all over the region. See you very soon,” said Nadal.

Explaining the decision to partner Tamdeen on the creation of the Rafa Nadal Academy Kuwait, Toni Nadal cited collective synergies and the stakeholders’ shared goals for excellence.

“We have been working so that players from all over the world train in tennis and life skills in Mallorca, where we try to instill in them the importance of hard work, sacrifice and humility so that they perform as well as possible and give their all. Here in Kuwait, we seek to do the same with young children and adults who come to these magnificent facilities. Nuno and the whole team of coaches will guarantee that the quality of our training is on par with the best in the world. With the aid of our great partner Tamdeen, we will help grow the sport in Kuwait,” said Toni Nadal.

Part of a new 263,000 square metre development alongside Tamdeen’s award-winning flagship 360 Mall, Rafa Nadal Academy Kuwait, which unlike its parent site in Spain will be non-boarding, will be the biggest international tennis academy in the Middle East, and an integral part of the first multi-facility and services complex for tennis in Kuwait. To compliment the tennis coaching and facilities, the Academy also featues a state-of-the-art fitness centres for men and women, and a players’ lounge with a focus on healthy F&B options.

Additionally, the new multi-purpose development includes a five-star hotel, as well as an exclusive and diverseselection of retail outlets, cafes and restaurants.

With the launch also serving as the opening for membership applications, Rafa Nadal Academy Kuwait will provide Kuwaitis and regional tennis and fitness enthusiasts with access to truly world-class facilities and professionally certified coaches who embody the all-action workethic of the planet’s best tennis player.

While stressing his ultimate aim of producing a future Kuwaiti tennis champion, Nuno Marques, the vastly experiencedRafael Nadal Academy by Movistar coach who will assume the role of Head ofTennis at Rafa Nadal Academy Kuwait, revealed his collaboration with the KuwaitTennis Federation to grow the sport domestically and provide a platform for people to pursue healthy lifestyles begins immediately.

“The Rafa Nadal methodology includes five main sections: tennis training, physical training, mental training, nutrition and competition. We are bringing that method to Kuwait. We want to create national champions, yet every journey must start at the beginning. Our coaches will engage with members, visitors and the community to transfer tennis knowledge and stress the importance of healthy, active lifestyles. By working hand-in-hand with Tamdeen, we will educate, excite and engage our players and deliver a platform to develop talent and fulfil lives. Our journey starts today.”