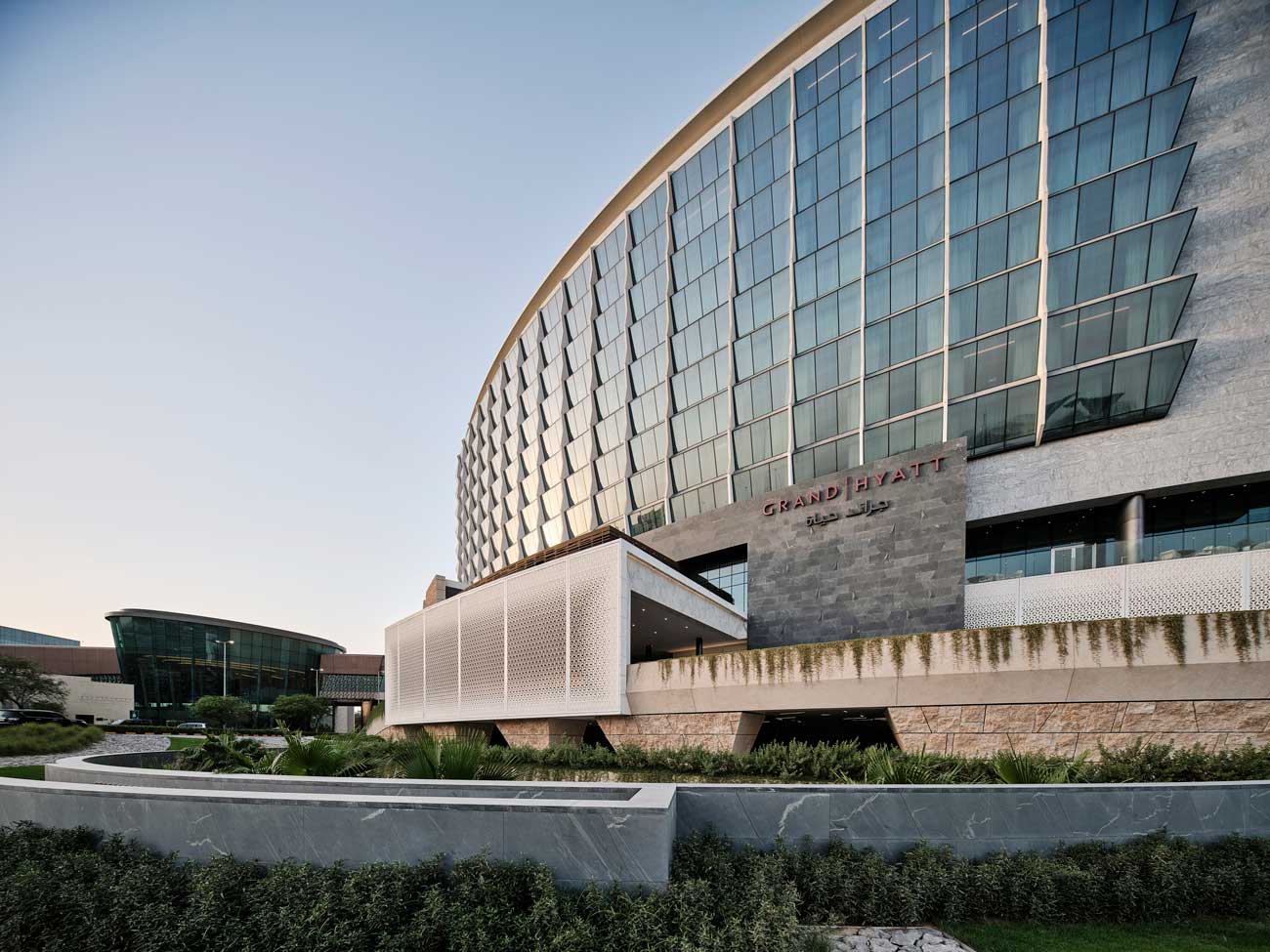 Slated to open in the fall of 2022, the milestone hospitality project was conceptualized by renowned global firm, CallisonRTKL

Considered one of Kuwait's most anticipated and impressive hospitality developments in recent years, GrandHyatt Kuwait has begun the countdown to its official opening later this year.The impressive property, which marks a major milestone for both Hyatt HotelsCorporation and Kuwait based owners, Tamdeen Group - Kuwait's leading mixed-use property developer - has already made a mark for itself as a new architectural landmark, and further reinforces Tamdeen Group’s commitment to the development of the State of Kuwait by curating and building innovative projects.

Distinctive in its design and grand aesthetic, the hotel seeks to position itself as an urban sanctuary within a larger destination that has a unique story to tell. The 302-key luxury urban escape, with its impressive and majestic architectural design, delivered courtesy of CallisonRTKL, aims to set itself apart with signature guest experiences which forms an integral part of the country's most immersive luxury social and lifestyle complex.

The hotel's design was conceptualized to seamlessly integrate into the context of the surroundings, complementing the established architectural lines, visually and functionally, while still making a distinct architectural statement all on its own. As the tallest building in the area, the nine guest room floors offers truly unobstructed views from every angle.

One of the property's most distinguishing design features is its curved design, conceived and executed in lieu of a traditional rectangular outline to allow for a more natural and harmonizing integration into the existing architectural landscape. The hotel's exterior design complements the curvilinear design aesthetic of the 360 Mall extension with a series of layers that splay out with unique characteristics.

These multiple design features are focussed on achieving an environmentally responsive building – inspired by and adapted for the local climate and culture.

Impetus for the design of hotel's signature exterior derived from the date palm leaf, with specific attention given to the branches of the palm and their ridged shapes that provide the narrative for structure and shade. An inclined glazing system allows the façade to shade itself for large portions of the day, whilst angled vertical fins were fused between each guest room to provide additional self-shading as the sun’s angle drops later in the afternoons.

Large dynamic screens inspired by the mashrabiya were designed with a highly detailed gradient pattern at the podium, maintaining high visibility at eye level while increasing the amount of shade and privacy in various focal areas. From the outside, the mashrabiya presents a beautiful and enigmatic front. Overall, the mashrabiya successfully merges cultural values of heritage, traditional geometric visuals and ancient technical aspects, into something beautiful that has truly stood the test of time.

Speaking about the inspiration and motivation behind the project, hotel designer Dustin Wekesser, AssociatePrincipal at CallisonRTKL said: "The entire 360 Mall Kuwait development isa fantastic project with many great entrances and influxes, but as an architectural team, we wanted to make Grand Hyatt Kuwait feel more exclusive and opulent, to set it apart on an entirely different level of luxury. During the conceptualizing phase, we thought a lot about scale and how guests would perceive their arrival from multiple distances and reviewed several levels of detail to achieve this. The hotel is clean and bold from a distance, featuring details that are angled and large enough to be observed from the main roads.However, as a guest approaches the hotel, the details get smaller and more intricate, creating a dynamic and vibrant play of patterns, shadows, light and textures."

He added: "Overall, the striking design is cohesive and thorough, as meticulous attention to every detail exemplifies the rigor and quality needed to meet the expectation of an unrivaled experience expected of an impending stay at Grand HyattKuwait."

As part of a flourishing mixed-use development, the architectural planning of the hotel sought to ensure a fluid connection between the adjacent areas that allow guests the ease of flow back and forth from the hotel to the mall. Unique accesses was created at the main communal levels to bid guests a variety of entry and exit encounters.The restaurants and lounges take advantage of a design with clear sight lines to absorb mall activities, while other spaces offer a more intimate and private experience exclusive to hotel guests. The indoor pool at Noor spa, for example, are shielded and located on a sunken level, featuring a private spa garden sanctioned by large expanses of glass while still maintaining an exclusive level of privacy.

Moreover, Grand Hyatt Kuwait encapsulates several elegant and timeless multi-faceted event spaces, each dynamically configured to make every occasion unforgettable - as exceptional as the location itself. The hotel boasts a striking multi-purpose Grand Ballroom, with a hosting capacity of up to 1,560 guests. It features a central atrium, complete with a sprawling skylight and decorative screen, allowing the natural light to filter into the hotel's interior spaces while simultaneously reducing visibility for more private events such as weddings, conferences, grand galas, and cocktail receptions.

As anticipation grows and the hotel opening draws near, Grand Hyatt Kuwait has positioned itself to be the most sought after luxury hotel destination in Kuwait and a prime example of high-performance design for the entire region.